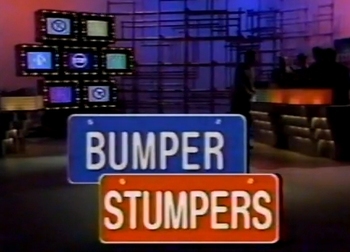 Game Show created by Wink Martindale with Barry & Enright Productions, the USA Network and Canada's Global which ran from June 29, 1987 to December 28, 1990, and has recently resurfaced on the Canadian channel GameTV. Two pairs of contestants competed to solve puzzles based on Vanity License Plates note (in the vein of William Steig's juvenile book C D B!) that might have belonged to celebrities or fictional characters.

Each game began with host Al DuBois reading a clue pertaining to a "Super Stumper" plate, then revealing the first of its seven characters. After this, a "jump-in" question was done in which the teams were shown two license plates and had to determine which (the left or the right) fit a clue Al read. If correct, that team had ten seconds to decipher the plate (if not correct, the other team that did not buzz in was given a chance to answer) - if successful, they chose a character to be revealed on the Super Stumper and had five seconds to solve it; if not, the other team had ten seconds to figure out the plate.

Gameplay continued in this manner until either the Super Stumper was solved or it was fully revealed and nobody could guess it. The winning team received $500 (later $1,000) and played the bonus game.

The format changed quite a bit over its lifetime:

Advertisement:
This show provides examples of: