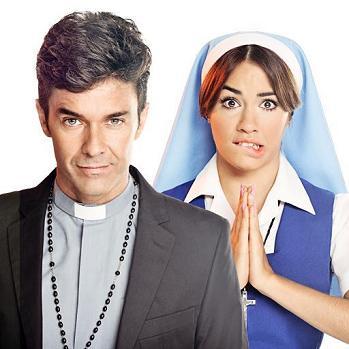 The Sexy Priest and the Naughty Nun.
Esperanza Mía is a 2015 Argentine telenovela, starred by Mariano Martínez and Lali Espósito.
Advertisement:

Julia was a girl from a small village, who witnessed a crime from a mafia. The criminals saw her and try to capture and kill her. In a desperate escape, she arrived to the local bus station, and took whatever bus was leaving at that moment (as long as it takes her away, it was fine). The bus took her to Buenos Aires. She headed to the Santa Rosa convent, headed by Concepción, an old friend of her adoptive mother. Concepción proposed her a cover-up: to join the convent, posing as a novice nun. She also used a new name, Esperanza, to complete the cover-up.

She fell in love with the priest Tomás, who sticks to his celibacy oath. But, unknown for both Esperanza and Tomás, Tomás brother is secretly the leader of that mafia operating in that small village!

Esperanza mía may contain examples of: