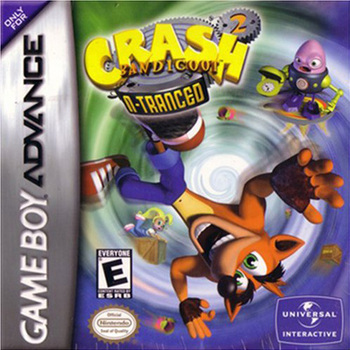 Crash Bandicoot 2: N-Tranced is the second portable installment in the Crash Bandicoot series and the official sequel to Crash Bandicoot: The Huge Adventure. Like its predecessor, it was developed by Vicarious Visions for the Game Boy Advance, and was the second in their trilogy of Crash platformers for the system.
Advertisement:

Having finally lost patience with Cortex's failures following his previous mishap with the Planetary Minimizer, Uka Uka decides this time to turn to Dr. Nefarious Tropy. The master of time already has a plan in the works, having enlisted N. Trance, the master of hypnotism from the fifth dimension. The duo abduct the three bandicoots and brainwash them to do their evil bidding. A misdirect with Tropy's vortex leads Crash to escape however, leaving him to fight and rescue his possessed friends...and another mysterious associate.

Followed by Crash Bandicoot Purple: Ripto's Rampage, which maintained the same gameplay in a Spyro the Dragon crossover, albeit with more mini-games.