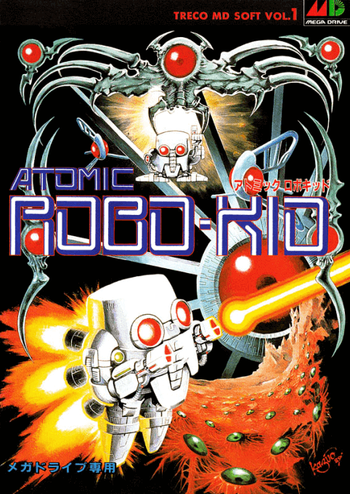 Say hello to the new kid in town!
Advertisement:

Atomic Robo-Kid is a horizontal Run-and-Gun game developed by UPL and Nikom.

In a futuristic Space Station labelled Terra-12, a deadly cosmic wave have wiped out all life on board, and releasing assorted mutant life-forms all over the area. The base's robot security activates by themselves in an attempt to contain the outbreak, and amidst all that chaos, a single robotic drone called Atomic Robo-Kid gains his own sentience, who proceeds to shoot his way out.

Gameplay-wise, Robo-Kid follows the classic "move forward, shoot at everything" format popular in arcades at the time, but with the added bonus that since you're a robot, you can remain afloat thanks to your underfeet thrusters. As Robo-Kid you take down enemies, robotic and organic alike, and while levels can be played in any order preferred thanks to the game having portals at assorted locations, though the bosses - called "governors" in-game - needs to be fought to access the following areas.

Contains similarities to Mutant Night, made by the same company.

Not to be confused with Atomic Robo.