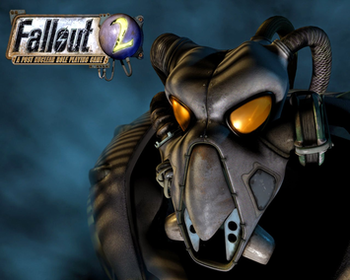 Give me a kiss to build a dream on...
"Our life is in your hands, Chosen One. Prove yourself. Find the GECK. Be our salvation."
—The Village Elder
Advertisement:

Fallout 2, part of, of course the Fallout series, was released in 1998. This installment improves much upon its predecessor, being a game where you can do just about anything, within reason. Depending on your actions, intelligence, charisma, gender and patience, each playthrough is a wildly different experience. Numerous pop culture references make this game a troper's best friend.

It's 2241, and the tribal village of Arroyo is an okay place to live. Aside from the trading caravans that come by every once in a blue moon, you and your family — the tribe — are completely isolated from the outside world, living life peacefully as one with mother nature... but nothing is ever that simple.

Several failed harvests and sicknesses in the Brahmin herds have taken a toll on the tribe, and your brothers and sisters are now slowly withering away from starvation and diseases. However, the sacred holotapes speak of one thing that might be the key to salvation: the legendary Garden of Eden Creation Kit, housed in the holy Vault 13, which is said to be able to bring life to even the driest of deserts. Arroyo needs someone to leave the village and search for the GECK. That someone is you.

You are The Chosen One, the grandchild of the Vault Dweller from Vault 13. Eighty years ago your ancestor ventured out to save his vault, and later ended up founding the tribe. Dressed in your great forefather's old Vault jumpsuit and carrying the only lead on your target — a Vault 13 flask — you now must journey out and find a trader named Vic in the nearby settlement of Klamath. He might know where you can find Vault 13, which probably has a GECK...

Or you could just give in to the temptations of the huge, open world that now lies in front of you, and do whatever you want.

An important note when discussing Fallout 2 is that its rushed development (releasing only a year after the first game) meant that a lot of intended content was cut or scaled down during development, some of which remained in the game files. There exists a fan-created mod known as the Fallout 2 Restoration Project (or F2RP), which aims to re-create as much of this cut content as possible, basing its work on leaked design documents and Word of God. It also includes various bug fixes and compatibility patches that make the game run significantly better on modern machines. The mod can be downloaded from the creator's website

or the mod's official No Mutants Allowed thread

. It should be noted the mod also includes a large amount of wholly-original writing, new game mechanics never conceived by the original devs, and gameplay rebalances based on the mod team's personal taste, so please refrain from treating it as the gospel-true version of the game.

The game was initially going receive a sequel known by the codename Fallout: Van Buren, but the studio closed before it could be completed. The rights to the franchise were sold to Bethesda Softworks, who created their own sequel set in a new locale unconnected to the first two games. Bethesda would eventually contract Obsidian Entertainment to create Fallout: New Vegas, a Gaiden Game which continues where Fallout 2 left off.