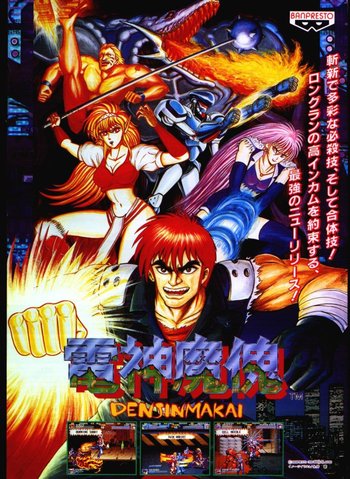 Denjin Makai is a Beat 'em Up Arcade Game created by WinkySoft and published by Banpresto (famous for its Super Robot Wars series) in February 1st, 1994. It was innovative for its time by including for each one of the six player characters an extended moveset (including team-up attacks) and by relegating special and crowd control moves to a special bar, much like a Fighting Game. A port titled Ghost Chaser Densei was released in September 23, 1994 for the Super Famicom. A Fan Translation of the latter was released in May 15, 2017. The original game was followed in 1995 by Guardians (1995) (also known as Denjin Makai II).

In A.D. 2079, in the Far East exists a city-state known as the Total Control Central Nation, controlled by a Central Command that observes, monitors, and rules everything in the entire city-state, because of this, crime is non-existent...or so it was thought. A mysterious group of criminals known as "Ghosts" have infiltrated the once-perfect city-state, evading the omnipresent detection through unknown means with an unknown agenda. In this situation, the human administrators of the city have assembled a special task force to deal with the criminals, known only as "Ghost Chasers":

Gentlemen, your next mission. Describe these tropes: