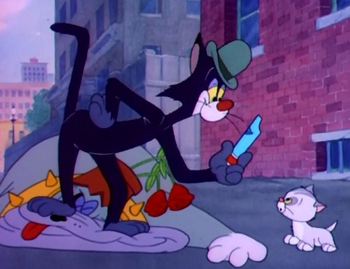 Gin a body, meet a body, coming through the rye...

"One of the most perfect cartoons ever made."
— Chuck Jones, praising his mentor's film.
Advertisement:

The short involves an innocent little kitten being bullied by a cruel bulldog. After enduring his slapstick torment the kitten escapes into an alley, and meets a cigar-smoking alley cat with black fur. The cat offers to protect the kitten by crossing the dog's path and causing him bad luck whenever the kitten blows on a whistle. The rest of the short involves the Amusing Injuries that befall the cruel dog as the kitten uses his newly-found protection to his full advantage.