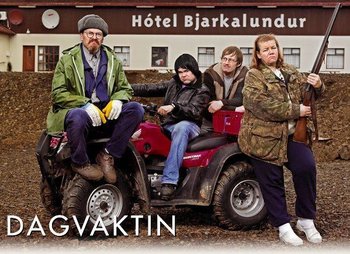 Dagvaktin (English translation "Day Shift") is an Icelandic Work Com, and the sequel series to the wildy popular (in Iceland, anyway) Næturvaktin. It stars the same Comic Trio of Georg, Daníel and Ólafur Ragnar, but is set in an isolated hotel in Iceland's Westfjords, owned and run by the formidable and sex-mad Gugga. Hilarity Ensues.

In this series, the characters get out and about more, instead of being tied solely to their workplace, and meet various locals. There is also some character development, and we learn a lot more about what makes the main characters tick, especially Georg. The series also has a greater level of drama, as the characters deal with tragedy, family problems and an unfortunate incident with a frying pan.

Episodes of this show provide examples of: