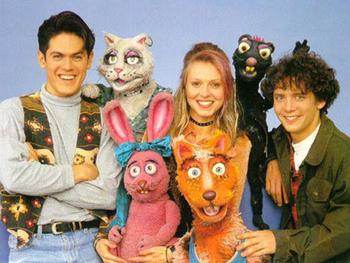 The Ferals was a television series created and broadcast in Australia for 1994 through to 1995. The series is set in a nameless town somewhere in the Australian suburbs and focuses on a specific house being rented by two university students, the eccentric yet affable Leonard (a science student), and the simultaneously more and less grounded Robbie (a medical student and a girl, despite the name). The show revolves around the interactions between the two students, their landlord Joe, and the motley crew of four noxious animals living in their shed — Rattus P. Rattus (a black rat), Modigliana (a feral cat), Mixy (a rabbit) and Derryn (a feral dog).

After it was cancelled, it spawned a successor series: Feral TV. When this in turn was cancelled, Mixy became a host for the ABC Kids programming block for some time, while Modigliana would become the puppet cohost of Creature Features. Before that Rattus and Modi both starred in a recurring segment on the edutainment show Numbers Count.

The Ferals includes examples of: