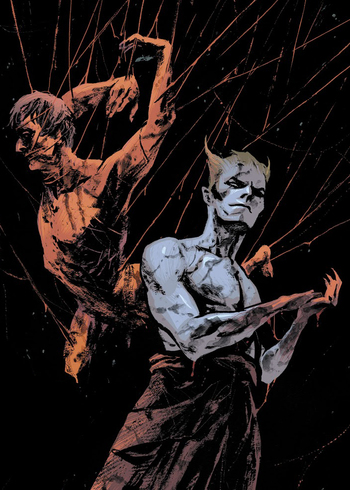 Look into our eyes and see who we are.
Lucifer Morningstar is a rebel archangel who was once given Hell as his own domain. After several thousand years he decided he no longer wanted to do what he believed was expected of him and so he abandoned Hell and "retired" to Earth.
Advertisement:
Mazikeen 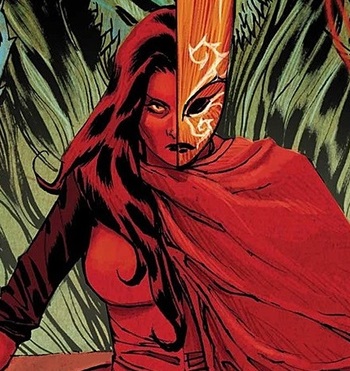 Explain to me why I should not kill you.
Mazikeen is a daughter of Lilith and Lucifer's lover. Her preferred appearance has her face half mutilated and half whole, until Jill Presto has her restored to life with "incomplete information". Mazikeen hates it, but can no longer change her appearance at will. She eventually becomes the leader of her family's army, The Lilim in Exile. 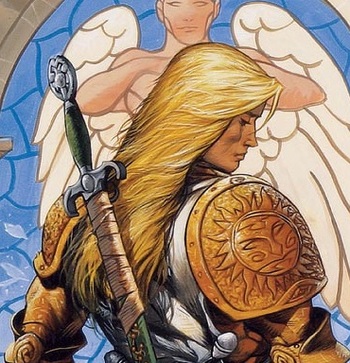 Justice is my father's prerogative. The rest of us ... the rest of us can only do what we think is right.
Before humans, before gods, before life, and before the DC Multiverse even existed, Yahweh, the Almighty, created two brothers, Samael and Michael. Yahweh then gave them each a gift: to Samael, the gift of fire and will and to Michael, he gave the gift of creation, the demiurgic power.
Elaine Belloc
An English schoolgirl who is later revealed to be Michael's half-human daughter (and Lucifer's niece). She's able to see and speak with ghosts, and she's the closest thing Lucifer has to a morality pet.
Advertisement:

Amenadiel
An angel who holds an exceptional grudge against Lucifer, antagonizing him repeatedly.
Meleos
An angel who runs a bookstore in Germany. He created the Basanos, the Living Tarot, and gave it life.
Perdissa
A fundamentalist angel who attempts to destroy Lucifer in China.
Advertisement:

Duma
The Angel of Silence, who descended to Hell with Remiel after Lucifer retired as its king. 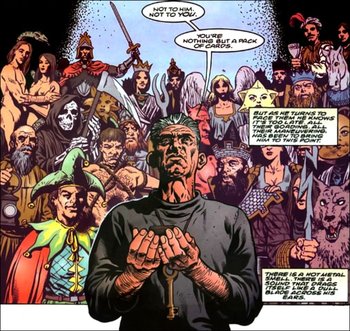 The Living Tarot, created by the angel Meleos. Powerful enough that their creator locked them away, they're one of Lucifer's more formidable enemies. They take advantage of having a human to "ride" and Lucifer's universe being free of the previous creation's rules, and are able to procreate.
Lilith
Adam's intended, who rejected God's plan for her and decided to live for herself. She's adamant that her claim to the Garden of Before the Fall is still valid, because she left on her own accord rather than being cast off.

Jill Presto
A cabaret artist who makes a bargain with the Basanos she lives to regret. She becomes their avatar to the world, and eventually the vessel of the Basanos' spawn.