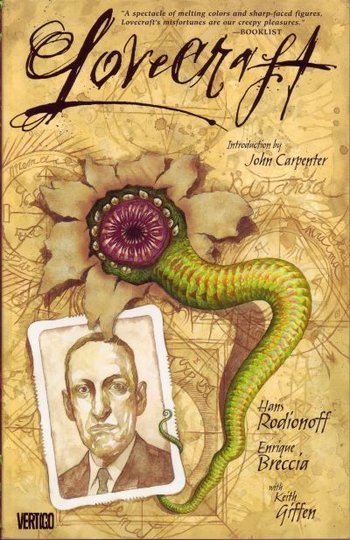 Lovecraft is a Very Loosely Based on a True Story comic retelling of H. P. Lovecraft's life, suggesting that the famous writer's horror stories were not simply products of his imagination. Originally conceived as a film script by Hans Rodionoff, it was turned into a comic book with help from DC Comics veteran Keith Giffen and artist Enrique Breccia, and was published by Vertigo Comics in March 2004.

Howard Phillips Lovecraft has a very bizarre childhood in the city of Providence. His father, Winfield, becomes acutely psychotic when his son is three years old and is confined to an asylum, where, to the day of his death, he keeps babbling about a book that needs to be burned. Meanwhile, Howard's mother dresses him up in girls' clothing and home-schools him, contributing to keeping him very isolated from the outside world. His only means of entertainment are his grandfather's ghost stories and his father's quite comprehensive library. It is in the latter that he discovers the ancient and very strange book, Al Azif, by Abdul Alhazred, also more popularly known as the Necronomicon.

The young Lovecraft quickly discovers that the verses in the book, when read out loud, open a portal to a dark, twisted version of Massachusetts, where stands the strange city of Arkham, populated by all sorts of weird, and sometimes malevolent, creatures. He starts paying regular visits to this other dimension, but soon discovers that some of the creatures from Arkham are following him into the real world, where they haunt and torment him, demanding that he surrender the Necronomicon to them, so they can bring the barrier between the dimensions down and take over the mundane world. Then again, it could all just be the escapist fantasies of a lonely young writer who had clinically insane parents and a pretty screwed-up childhood.