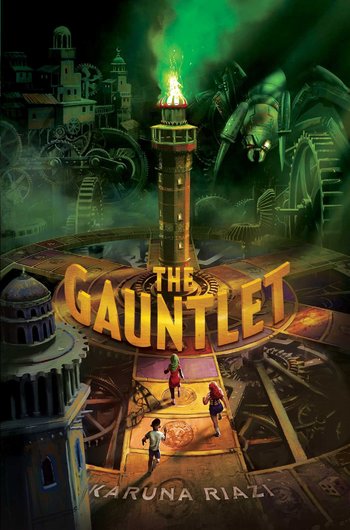 The Gauntlet is a Fantasy Adventure book by Karuna Riazi

Farrah Mirzah is a pre-teen girl from a family of board game lovers. On her twelfth birthday, her Aunt Zohra visited, leaving her present in the guest bedroom. When they enter it, they find a brown package containing a board game called "The Gauntlet Of Blood And Sand". Thinking this is the game, Farrah and her friends, Essie and Alex, decide to give it a try. They set it up, pick up the play pieces, and out of nowhere, Farrah's little brother Ahmad grabs one of the pieces and shouts "I am ready for the Gauntlet!", and disappears.

When Aunt Zohra finds out, she's devestated. She tells Farrah and her friends that the game wasn't her intended gift, but is in actuality a trap that she lost a friend to years ago. The game lures in children, and then traps them inside of it. And now the game has Ahmad.

With no other options, Farrah, Essie, and Alex enter the game with the intent of rescuing Ahmad from its clutches. Once inside, they're tasked with taking part in a set of challenges that they must complete to be able to go home.

The Gauntlet contains examples of: