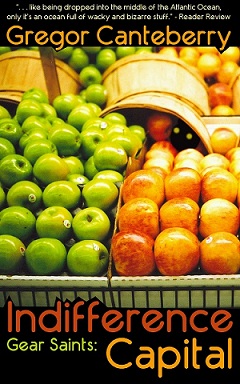 There's something wrong with this picture.
“Our only choice is to become marauding produce bandits, knocking over shipments from the orchards before they can reach the stores! WE SHALL BRING ABOUT . . . THE PRODUCE-POCALYPSE!”
— Bobo, Indifference Capital
Advertisement:

self-published on Amazon by Gregor Canteberry. The main character, Cecil, is the resident Mad Scientist of the city of Heronberg. Along with his odd roommate, Bobo (pictured right), he protects the city from all manner of supernatural, technological, and extraterrestrial threats. He is quickly joined by Paula and Scott. Word of God indicates

there will be a future character named Siegfried.

: Heronberg: Home to supernatural creatures, evil corporations, and a dangerously indifferent populous. When the brand-new supermarket gets up and starts walking around, the resident mad scientist must team up with a secretary and a physics-defying ball of insanity to fight self-aware shopping carts and a monstrous artificial intelligence.

Book 2: Mirror in the Crosshairs

: Heronberg: Home to . . . the highest gun-ownership per capita in the world. It's doppelganger season, a magical time of year when blood-sucking creatures appear in human form to prey on the people. The resident mad scientist, a secretary with a brand-new pistol, and a physics-defying ball of insanity team up to hunt monsters and try not to get mistaken for prey.

Character sheet (temporarily placed here until a new page is created for it):

Bobo: Cecil's roommate and sidekick. The cause of, and solution to, all his problems.

The second book (Mirror in the Crosshairs) provides examples of: