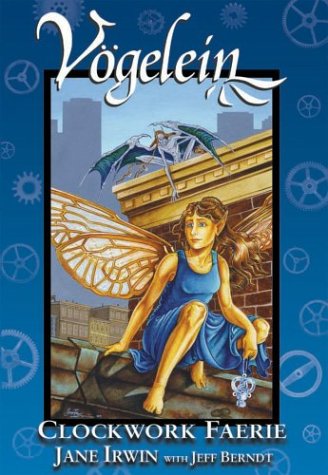 "From dawn the first day until dusk the next. That is how long I have."
— Vögelein
Advertisement:

Vögelein is an independent comic written, penciled and inked by Jane Irwin.

When Jakob, Vogelein's Guardian of 50 years, dies quietly in his sleep one night, her life is thrown into utter turmoil. Left without someone to wind her, the tiny clockwork faerie has less than five hours to live — unless she can find someone to trust. Unable to reach the keyhole in her back, she continues to wind down until she stops — and then her memories of the past three hundred years will quickly slip away, leaving her a simple automaton unable to speak or move on her own. In her search for a new Guardian, Vogelein must grapple with her own past, her current daily survival and a true Faerie who has taken an instant disliking to her, all so that she will not lose her memories — and her self. The home page is here

, where you can see one of the chapters.