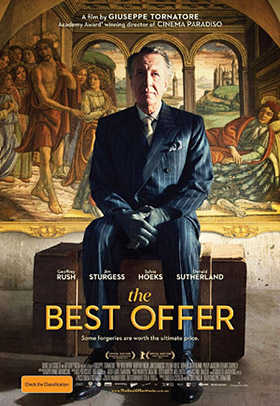 Virgil Oldman (Geoffrey Rush) is a solitary, cultured man whose reluctance to engage with others, especially women, is matched only by the dogged obsessiveness with which he practices his profession as a high-end antiques auctioneer and valuer at the top of his career. One day Virgil receives a phone call from a mysterious young heiress, Claire (Sylvia Hoeks), who asks him to evaluate her deceased family's works of art, housed in a large villa. It will be the beginning of a complex and turbulent - but physically distant - relationship that will change his life forever.