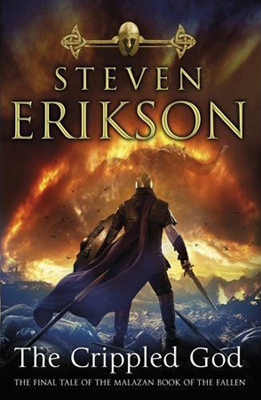 Only the fallen may rise again.
Advertisement:

The Crippled God is the tenth and final book of the Malazan Book of the Fallen, following Dust of Dreams.

Tavore Paran leads her Bonehunters further into the Glass Desert, on their way to reach the Kingdom of Kolanse on the far eastern shore of the continent, where the Forkrul Assail have captured the heart of the Crippled God and are about to conclude their nefarious plans. Yet still the Adjunct seems determined to march her army to certain death without giving them so much as a reason for it. Mutiny seems inevitable as soldiers die by the dozen from thirst and heatstroke. Rumors of imminent betrayal only serve to worsen the mood, and unrest is stirring among the Perish Grey Helms, the Adjunct's longest standing allies.

The Forkrul Assail, meanwhile, find themselves facing another foe — one of whom they can make neither rhyme nor reason. Only able to guess the plans of his sister, but trusting in her nonetheless, Ganoes Paran is tenaciously chipping away at the Forkrul Assail's patience.

In far-away Kurald Galain, the Shake have rediscovered the lost city of Kharkanas, the ancient home of the Tiste Andii. They find themselves facing the Tiste Liosan, who have set their eyes on conquering the shore of Lightfall, which divides the realms of Light and Dark, and reinstating themselves into power.

Even the Gods must choose sides in the climactic battle to come, though even among allies there is mistrust and hidden agendas. And it seems the dragons are intent on roaming the world once more.

The Crippled God provides examples of the following tropes: