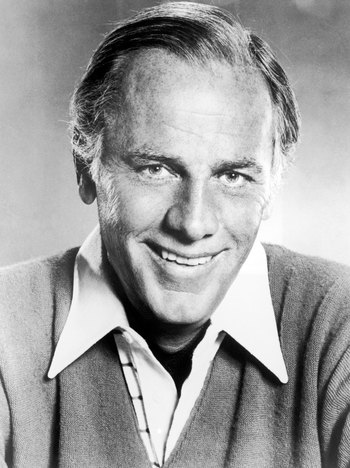 As famous as his role on the show, however, was how he was written off from it. Despite the show's success, Stevenson began to resent playing a supporting role to Alan Alda's wisecracking Hawkeye, and asked to be released from his contract during the show's third season. The show's writers reluctantly penned him an exit in the Season 3 finale "Abyssinia, Henry", in which Lt. Colonel Blake was discharged and boarded a plane home — only for it to be shot down, killing everyone on board. As a result of his infamous exit, he became the Trope Namer for McLeaned, for when a character is Killed Off for Real (with no subsequent Death Is Cheap shenanigans) after their actor leaves the show.note Stevenson did, however, make a one-shot gag appearance as Blake on Cher's variety show, sitting in a rubber raft and telling the audience, "Hey, guys! I'm okay! I'm okay!"

Stevenson's post-M*A*S*H career suffered, with multiple attempts to star in another show turning into ratings flops. However, he did enjoy some success as a regular on such game shows as Pyramid, The Hollywood Squares, and Match Game and as a frequent guest on The Tonight Show Starring Johnny Carson.

Stevenson was married three times. He died in 1996 at the age of 68 as a result of a heart attack. (By a rather eerie coincidence, Roger Bowen — who'd played the Blake character in the film version of M*A*S*H — died the following day, and of the same cause.)