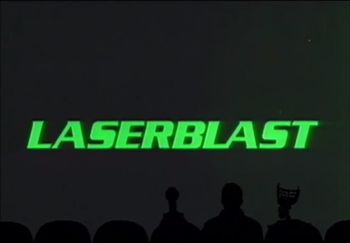 Terrible name for a laser eye surgery, scares away the customers!
Advertisement:

Laserblast was featured on MST3K in what would be the last episode of its final season on Comedy Central (before moving to the Sci-Fi Channel). As such, the MST3K episode itself was something of a series finale as the staff wasn't sure it would be saved from cancellation. It also marked the final episode with Trace Beaulieu, who portrayed both longtime nemesis Dr. Forrester and the voice of Crow T. Robot.

Pearl: Another chance to do it right! Isn't this wonderful, baby?
Star Child Clayton: Oh, poopie.
Van Hippie: Faaaaar out!