Literature / Island of the Blue Dolphins 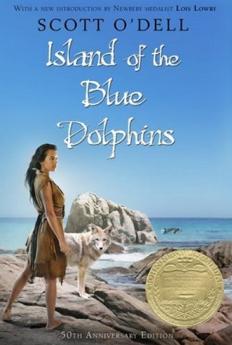 Island of the Blue Dolphins, written by Scott O'Dell and published in 1960, tells the true story of the "Lone Woman of San Nicolas Island," an Indigenous American woman marooned for 18 years, and was the Newbery Medal winner of 1961. Think Robinson Crusoe, but with a Native American girl.

Spanning from the period before her abandonment up to her departure from the island, the story is narrated by Karana, the marooned woman. After many of Karana's people are killed in a battle with Aleut

hunters, the remaining islanders emigrate from the island to the California mainland. An impending storm forces the ship to leave early and Karana and her younger brother are left behind. Soon after, her brother is killed by a pack of wild dogs. The ship never returns, and Karana is left alone on the island for what will be 18 years.

During that time, she learns to survive on her own. She takes over traditionally male tasks such as canoe-building and spear-making in order to survive, overcoming superstition that doing so would bring bad luck. Also during that time she domesticates the wild dog who killed her brother, attempts and fails to leave the island on her own, fights a "devilfish", and secretly befriends an Aleut girl when the Aleut hunters return.

A film adaptation was released in 1964, directed by James B. Clark and starring Celia Kaye as Karana.

In 1976 O'Dell wrote a sequel, Zia, which tells of Karana's eventual return to the mainland and her experiences at a Spanish-run mission along with her eponymous niece.

Tropes found in Island of the Blue Dolphins: