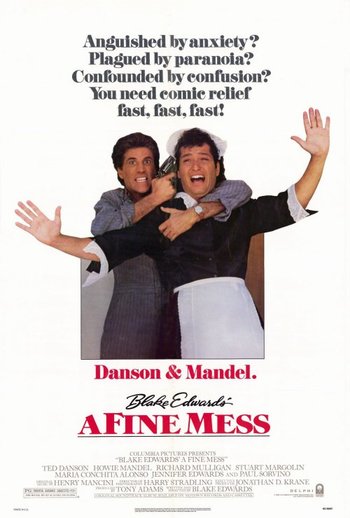 Aileen: This is a Cadillac without doors!
Phil: So what? It's a Cadillac.
Advertisement:

The plot centers around small-time con artist and aspiring actor Spence Holden (Danson) and his best friend, frustrated waiter Dennis Powell (Mandel) who stumble upon a horse doping plot and the gangsters involved, turning the movie into an extended chase, leading to them accidentally buying a piano at an auction. Claudia Pazzo (Alonso) offers them $8,000 for it (though they paid $10,000), since she claimed that she had wanted to buy it herself but "this crazy racehorse" caused her to get "held up in traffic." Later that night, Spence calls her up and asks if it would be possible to deliver the piano to her house tomorrow, and that he'd really like to see her again. She says she'll be over in 20 minutes. (See below under Naked in Mink.) Unfortunately, she's married to Tony Pazzo (Sorvino), the local mob boss whose idiot flunkies, Maurice 'Binky' Drundza (Stuart Margolin) and Wayne 'Turnip' Parragella (Richard Mulligan), are the ones responsible for doping the horses in the first place. Dennis hates his job as a rollerskating waiter and his boss and wants to open an Indian food restaurant called Gandhi's, which would specialize in curry, although he's never actually tried it before. He also strikes up a relationship with the lady from the auction, Ellen Frankenthaler (Jennifer Edwards.)

The film's poor box office showing was reinforced when Sorvino and Alonso both appeared on the May 18, 1998 episode of Vibe to promote separate projects. When Alonso came out for her interview, she rushed over to Sorvino, saying, "My husband, my husband," and then had to explain why she was saying that.

A Fine Mess of Tropes: