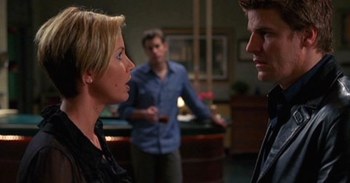 Angel is happy in his newfound relationship with his son, but Connor is secretly waiting for revenge, mistakenly believing Angel killed Holtz - just as Holtz had planned as his final revenge on Angel. The pair fight off an armed hit group sent by Linwood and Gavin at Wolfram & Hart to abduct Connor. Meanwhile, Lilah continues to try to recruit Wesley by manipulation and seduction, and shows him that he is now very much like her: a human without a soul. Lorne confides in Angel that Cordelia really loves him before leaving town for a new job in Las Vegas. The Groosalugg leaves too, after confronting Cordelia about her feelings for Angel. With the Groosalugg gone, Cordelia and Angel agree to meet. But before either can confess their feelings for the other, Cordelia is confronted by the demon guide, Skip, who tells her that as a higher being, it's now time for her to leave Earth's plane of existence and move on to another. As she ascends, Angel is waylaid by a vengeful Connor and Justine who seal him in a metal coffin and throw it off a boat to sink down to the ocean floor.