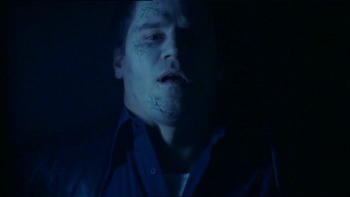 The entire gang, complete with Connor, Lorne, and Wesley sit around a table enjoying a happy meal together. Connor has a great relationship with his father and even Wesley is present. As plates are passed around the table and Angel is ignored, things start to change and soon the dream becomes reality and a physically weakened Angel is in his watery prison. Fred and Gunn run back to Gunn's truck, trying to escape vampires. One crashes onto the windshield and more arrive in another car.

Gunn and Fred, now running Angel Investigations themselves since Angel and Cordelia both disappeared on the same night, ask a vampire gang about a girl named Marissa, but the vampires aren't really interested in talking. After giving up what could be accurate information about Marissa, the vamps attack. Several of the vampires are slain and Connor jumps in just in time to save Fred from a flying ax. Gunn and Fred lecture Connor back at the hotel about the danger of his wild actions, despite the fact that they're all still alive. In the office, Fred talks about their efforts to look for Cordelia and Angel and how little success they've had over the past three months.

Angel stands atop the cliffs, where he was meant to meet Cordelia. This time, she arrives and the two discuss their feelings for each other even though Angel realizes this isn't how it happened. As the two kiss, Angel's hunger takes over and he starts feeding from her. Under the water, Angel wakes up screaming. Connor finally finds out from Gunn and Fred that they have another lead into Angel's whereabouts, and he's not pleased that they didn't tell him earlier. Fred agrees to let him to tag along as they check out a potential location for her. While Connor's out of the room, Gunn and Fred argue about the tough situation they are in with the hotel, business and the struggle to find Angel and Cordelia. Both know that if this lead doesn't pan out they'll be at a complete dead end, since the only other options are Wolfram & Hart or Wesley (who has already refused to help twice)

Lilah collapses on top of Wesley after another round of sex. Seemingly on much better terms, Lilah attempts to weasel information out of Wesley on where Angel is. Wesley makes it clear to her that he doesn't know where Angel is and doesn't care, claiming that part of his life to be over. After she leaves, Wesley dresses and proceeds towards a closet. Inside, he has Justine chained up in a cage and he announces that it's time for them to go look for Angel. Later, Justine taunts Wesley as he directs a boat around the ocean in search of the steel box Angel is confined in. Connor kicks in a door at the building where the gang hopes to find Marissa. They find her and grill her about the cliffs where Angel last went to, but Connor lets her escape. He runs after her and kills her before Gunn and Fred show up. He cuts himself with the stake and pretends as if she attacked him when the others arrive and then runs off.

Angel finds Connor on a tall rooftop and they start to talk before they're rudely interrupted by a group of vampires. Angel and Connor fight and kill them all and then Angel snaps Connor's neck. In his underwater grave, Angel wakes and starts to scream again. Fred finally reaches Lorne in Vegas, but he's very busy and doesn't have any new information to share with her. At Wolfram & Hart, Linwood, Lilah and Gavin walk as Linwood praises Gavin's latest findings. Lilah realizes that they know about her and Wesley and tries to offer an explanation, but Linwood really isn't interested.

Wesley finally senses something metal on his sensor and sends Justine down to check it out. It turns out to be Angel and the steel coffin is raised from the ocean. Wesley opens it and frees Angel's arms only to have Angel wake up and catch Wesley's throat in a death grip. Although it initially seems Angel is following through with his promise to kill Wesley, Wesley is able to lower the arm back down as he explains to Justine that while vampires can live forever without feeding prolonged starvation can cause brain damage. Wesley slowly feeds Angel animal blood while Justine taunts him from the background, reminding him that Angel and the rest of the team hate him and will never take him back.

Connor returns to the hotel to find Fred and Gunn worried and waiting for him. Connor gets testy when Gunn suggests Connor's like his father. On the boat, Angel hallucinates that Lorne is on the boat with him as Wesley comes below deck to check on Angel's progress. Angel sees Connor instead of Wesley and Wesley realizes that the animal blood isn't returning Angel's strength fast enough and cuts his own arm to feed Angel. Before a meeting, Lilah absentmindedly strokes the top of Linwood's chair. As the meeting begins Linwood asks a room full of lawyers about Lilah and her future at the firm due to her failures regarding Angel. Lilah smugly and quickly turns the tables on him saying "I may have failed on numerous occasions, but one thing I've never been is afraid of Angel." She announces that she spoke with a Senior Partner. Linwood becomes visibly angry demanding from Lilah "You went over my head?" Lilah smirks and says "Well, more like under it." Then, with a touch of a button, Linwood is beheaded and she's the new boss. She asks Gavin to remove the head.

Fred brings Connor a sandwich and they start to talk as he eats. Unexpectedly, Fred promises him great suffering for what he did to his father and then subdues him with a stun gun. Downstairs, Fred speaks angrily to Connor as he's tied to a chair. She and Gunn reveal that Wesley called them and informed them about his finding Angel and that Connor was behind his disappearance all along, and accuse him of also disposing of Cordelia. Meanwhile, Wesley buckles Angel into the car and leaves Justine handcuffed to the pier, telling her she can continue being a slave or live her own life. Back at the hotel, Connor argues with Fred and Gunn that Angel's not his father and shows no regret for his actions. Wesley carries a weakened Angel into the hotel and, after making sure he's ok, Gunn and Fred demand to know why Wes didn't tell them what was happening or warn them about Connor. Wesley doesn't offer much of an explanation and just leaves, showing just how little he cares for his former friends.

As Wesley leaves, a noise is heard in the office, drawing the attention of the humans. Having broken free of his restraints, Connor knocks Gunn down and shocks Fred with the stun gun, but as he turns around Angel's standing in front of him. Angel orders him to sit and he explains to his rebellious son the truth about Holtz's death and Angel's lack of involvement in it. Realizing he's in trouble, Connor attempts a getaway, but Angel isn't done yet and throws Connor into the wall. After making sure that he had nothing to do with Cordelia's disappearance, Angel tells Connor, with a parting lecture about life and an admission of love, to leave, which he does immediately. After he does so, Angel nearly collapses with Gunn and Fred urging him to rest but Angel's main focus now is finding Cordelia.

Meanwhile, Cordelia, now in a higher dimension, bemoans her boredom.