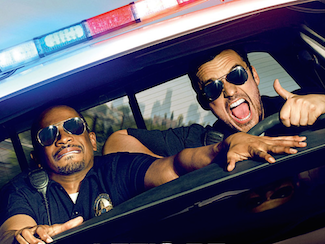 Fake Cops. Real Trouble.
Ryan O'Malley and Justin Miller aren't satisfied with their current situation. Justin is an ignored employee at a video game company, and Ryan is a jobless ex-football player with no real direction in life, mostly living off his royalties from being in an ad for herpes medication. The directionless feeling of their lives is only underscored when they attend their college reunion and mistake a masquerade ball for a costume party, showing up dressed as cops. On their way home, however, they discover that the costumes are real enough that they can fool basically anybody. Even actual cops.

The new found respect the outfit entails is exactly what Ryan has been looking for, and after studying YouTube videos of police procedure and buying a used cop car off eBay, he drags a reluctant Justin along on their new "career" as LAPD officers.