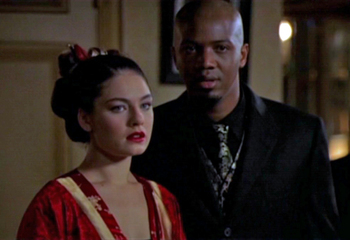 Gwen Raiden meets with a shady contact who gives her some papers. She is struck suddenly by something and is knocked down.

The Angel team reacts to Cordelia's revelation of her pregnancy. Lorne is shocked that a mystical pregnancy occurred right under his nose and he didn't sense it. They decide to research and see if they can understand how she is so far along so quickly. Cordelia talks to Connor, who questions why she asked him to kill Angel.

Gwen returns to ask Gunn to help her rescue a little girl from a wealthy and powerful tycoon during a posh party at his high-tech security mansion.

Wesley and Fred talk to each other during research, and Wesley admits that he did have feelings for Lilah.

Upon their arrival at the party, Gunn surprises everyone with his command of Japanese language and etiquette, even presenting the host with a gift (which he lifted from Gwen's apartment). Gwen uses him to cause a distraction while she goes off on her own mission.

Meanwhile, Angel and the rest of his team, researching Cordelia's sudden pregnancy, are hindered by an overprotective Connor.

After beating up a guard, Gunn realizes he has been tricked by Gwen: her target is actually a high-tech military device titled L.I.S.A. Although Gunn initially is angry with Gwen for lying to him, she observes that he's having more fun than he's had in a long time and he eventually relents and assists her.

Angel has managed to reconstruct a passage from a destroyed book through his photographic memory. Unfortunately, he was not quite able to get all of the details right. Meanwhile, Lorne has managed to contact a demon called Wanda, who provided a spell that should restore his empathic abilities. It will require him to go off by himself, but he reassures the gang that completion of the ritual will allow him to tell what is inside Cordelia.

After retrieving the device from the safe, Gunn and Gwen are cornered by Morimoto and his guards. In a fit of rage, Gwen reveals that she is stealing the device for herself. She electrocutes the guards and she and Gunn escape from the house.

Lorne begins his ritual, while Cordelia looks on, unseen.

Back in her apartment, Gwen admits to Gunn that she has never been able to so much as hold hands. She tells Gunn that he's more than just muscle. She explains that the device will allow her to control her electrical powers and touch other people. In an intimate moment, they use the device, he places it on her back. After a brief scare, when they are unsure of what the device will do, Gunn touches her to test whether the device has worked, and when they both realize it has, the moment becomes more intimate. Although she is initially concerned that the device won't hold, Gunn reassures her, and the two sleep together.

Lorne continues with the ritual, which includes burning several substances, sprinkling ash on his skin, and then vocalizing while holding a hidden object. Unseen, Cordelia sneaks up on him with a knife, only to find herself cornered by the rest of the Angel Investigations team, with rifles. Lorne reveals that the ritual was a fake, designed to expose Cordelia, and that the object he's holding is a Magic-8 Ball. He asks it if Cordelia has been a bad girl, and it replies "Definitely".