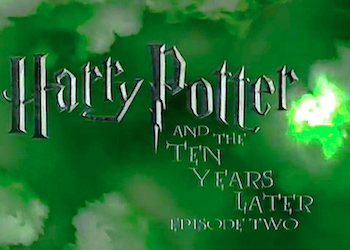 You Knew It Was Going To Happen.
"ACCIO TROUSERS!!!"

Running on Rule of Funny and tons of Alternative Character Interpretation, Harry Potter and the Ten Years Later is a fan-based production from Furious Molecules that takes Harry Potter and friends into the mysterious, confusing, back-stabbing world of adulthood... Muggle-ized. Set ten years after the fall of Voldemort and the events in Harry Potter and the Deathly Hallows, the Department of Aurors has been shut down due to no Dark Wizard activity, Harry's lost his job, Ginny wants a big family, Ron and Hermione have split up and Ron's now hiding in the woods stealing... oh, ack, you have to see it to believe it.

Completely and most definitely Not For Children or Younger Viewers.