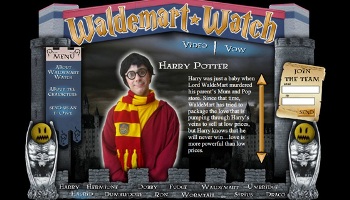 Harry Potter and the Dark Lord Waldemart is a trio of YouTube videos created by Walmart Watch which attack Walmart by spoofing Harry Potter. For the unfamiliar, Walmart is an American retailer and Walmart Watch is an activist group slightly unhappy with them.

Walmart is personified by Lord Waldemart, who wears a Black Cloak with his face hidden by Walmart's smiley face logo. Years ago, Waldemart killed Harry's parents' business and now he wants to build a Walmart at Hogwarts, which would destroy all the shops in Hogsmeade. Hilarity Ensues.

You can view them here

Harry Potter and the Dark Lord Waldemart provides examples of: