Web Video / The Gay and Wondrous Life of Caleb Gallo 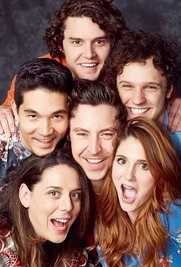 The Gay and Wondrous Life of Caleb Gallo is a comedy web series produced by Brian Jordan Alvarez. It follows a group of young friends in Los Angeles desperate for love and thrills. Can be watched here

. Following the life of an aspiring acting teacher and his actor friends, this 5-part series delves into the complexities of self-discovery, diversity, and emotions that accompany relationships.