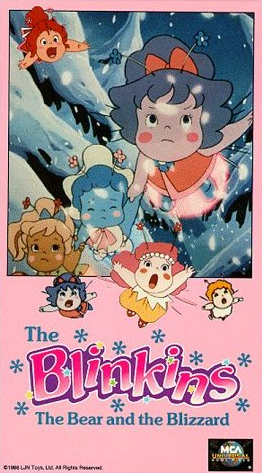 The Blinkins were a short-lived line of toys by LJN Toys focusing on a group of adorable fireflies, the Blinkins, who helped attend to nature and solved problems that occurred in the forest. They were aided by the wise Benjamin the Owl, but had to beware of Grog the frog, who wanted to catch the Blinkins and eat them.

In conjunction with the toys, books and three half-hour animated specials were made, with the second and third specials telling half of a continuous story. The first special, The Magic Flower, has the Blinkins appointed to help the Magic Flower of Spring end that year's winter—but the evil crocodile Mr. Slime, with help from Grog the frog, has other ideas in mind.

The second special, The Blinkins and the Bear, had a girl named Molly lose her favorite doll in the woods. The Blinkins attempted to return the doll, but Flashy was captured, and Grog convinces Mr. Sneed, a bear, to ransom Flashy in exchange for food for the coming winter. The third and final special, The Blinkins: The Blizzard, dealt with winter arriving while the Blinkins tried to save Molly, Flashy, and Blinkin Wood from a blizzard.