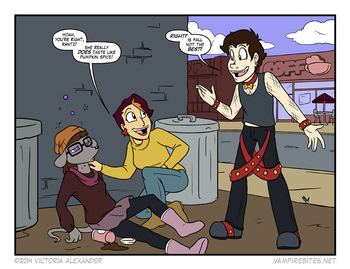 Chloe and Rantz, taking in some local flavor.

is a webcomic by Victoria Alexander.

The story follows Rantz and Chloe, two vampires that were newly turned, though from whom hasn't been revealed yet. However since they were "orphaned" by the one who turned them, another much more older vampire named, Arak, who masquerades at their school as one of their teachers, takes them in to train them in the ways of using their power and controlling their hunger. Through all of this, the duo deal with high school and the threat of hunters who are not afraid to stake them on sight.

Due to Victoria's busy schedule (she's a illustrator on Archer among other commitments), the comic only releases strips every fifth of the month (most of the time, again busy schedule and sometime technical difficulties), with a full story arc in October.

Beginning in 2013, it's updated on it's own site as well as the author's Deviantart page.