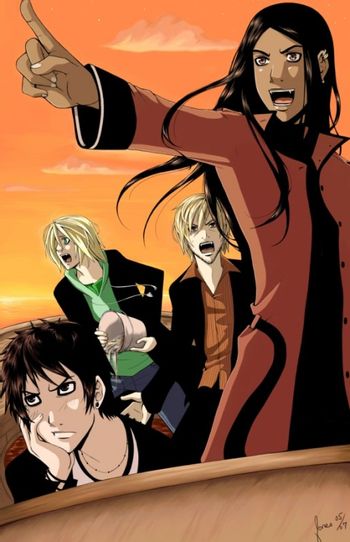 From left to right: Murphy, Clyde, Ira, and Hassan
Advertisement:

is an online comic that debuted in 2005, created by Jones. The series follows a rag-tag group of Canadian Vampire Pirates on a mission to visit their ex-captain and exact revenge for his ruthless deeds. Getting there won't be easy however, what with the ferry hijacking, bar brawls, and dealing with hiding an even bigger crime - biting and turning someone into a vampire. Vampirates! contains vampires, pirates, kidnapping, blackmail, cross dressing, and yaoi.

The cast is as follows:

It went on an unplanned hiatus in March of '09 and was officially discontinued on 9th January 2011.

It has no relation to a novel series by the same name, other than containing vampire pirates.