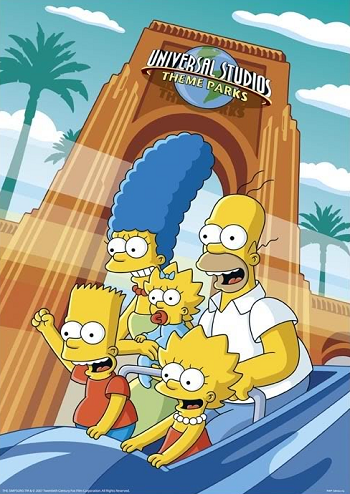 Sideshow Bob: There’s nothing you can do! You’re about to die!
Homer Simpson: You sound like my doctor!
Advertisement:

The Simpsons Ride is an animated simulator attraction that can be found at the Universal Studios parks in Orlando and Hollywood.

Based on the cartoon series, the attraction spent many years in Development Hellinvoked, with the idea of it going all the way back to the early 1990s with plans to have it at the then-still under construction Islands of Adventure park, though it all fell through due to Fox not feeling ready to license out the property. It would not be until the late 2000's that Fox finally agreed to allow Universal to create a theme park attraction for the series.

The backstory of the attraction focuses on Krusty the Clown opening his own amusement park, known as "Krustyland". The park features a variety of unusual attractions which attracts the attention of all of Springfield, including the Simpsons family themselves.

The main plot of the ride follows the Simpsons and their visit to the park, particularly their excitement to experience the grand opening of the park's latest attraction, "The All-New Thrilltacular Upsy-Downsy Spins-Aroundsy Teen-Operated Thrill Ride". Things take a turn for the worst when Sideshow Bob, thirsty for vengeance once again, plots to kill the Simpsons and destroy Krusty's theme park. Disguising himself, he manages to break in and hijack the entire park, transforming it into his own personal death trap. As a result, the Simpsons along with the riders themselves are sent on the ultimate trip through this re-designed theme park.

After a little over a year of construction, the attraction opened in both parks on May of 2008, in place of Back to the Future: The Ride, which closed in 2007.

Tropes shown in The Simpsons Ride include:

Inside Krustyland is a kiddie ride themed around singing elves.

Example of:
It's a Small Ride

Inside Krustyland is a kiddie ride themed around singing elves.