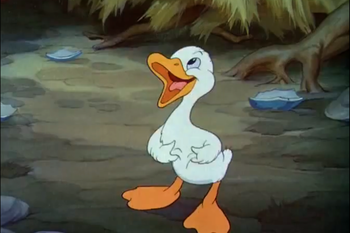 The Ugly Duckling is a 1939 animated short film (nine minutes), from Disney, directed by Jack Cutting. It was the last installment in the Silly Symphonies series that ran from 1929 to 1939.

It is of course an adaptation of "The Ugly Duckling" by Hans Christian Andersen. A mama duck hatches five eggs, resulting in four cute little yellow ducklings, and one duckling that looks—different. It's white with a big beak, and it honks noisily rather than go cheep-cheep like the cute ducklings. The father stalks away in a rage. The mother and the other ducklings shun the Ugly Duckling, which eventually wanders away from its family, looking for a place to belong.