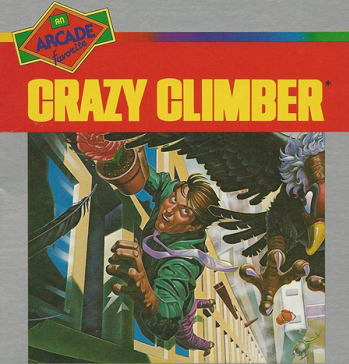 Released in 1980, this arcade game by the relatively obscure company Nichibitsu stood out from other games of the time by not being terribly focused on action and having a fairly sophisticated control scheme involving two joysticks and no buttons. Each joystick controls one of your character's arms and your goal is to scale a large building while avoiding obstacles coming down on you from above, windows closing on your hands to make you lose your grip, live wires, and a giant ape resembling King Kong (note that this game predates another game inspired by King Kong by one year).
Advertisement:

For a game that you'd be hard-pressed to find someone who's even heard of it, Crazy Climber received a pretty decent amount of ports, remakes, and even legitimate sequels over the years, almost all of which never made it outside of Japan.

Crazy Climber has examples of the following: