Literature / One for the Morning Glory 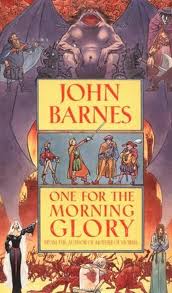 "This is not how these tales end," Calliope said firmly.
"This is not the way that things end when they get to be tales," Amatus said, "but since ours is not told yet, we cannot count on it. There were a hundred dead princes on the thorns outside Sleeping Beauty's castle, and I'm sure many of them were splendid fellows."
Advertisement:

One for the Morning Glory is a darkly comedic fantasy novel by John Barnes. The premise of it is that the characters are all aware that they feature in Fairy Tales...but they do not know which roles they play in the stories.

Four mysterious Companions arrive at the castle, and the novel follows Prince Amatus through his adventures in the underground goblin kingdom, the attack of a mysterious illness, and the invasion by the usurper of the neighboring kingdom.

And word play. Lots and lots of word play. The book is full of malapropisms used seriously and consistently throughout the work.