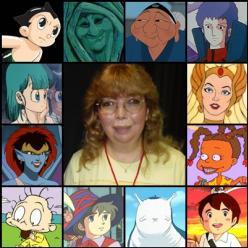 Rocío Garcel (in the middle) and some of her roles
Advertisement:

Sofía María del Rocío Garza Ramírez, better known as Rocío Garcel (born in Mexico D.F., on September 18, 1948), is a Mexican voice actress and dub director. She is best known for giving voice to Bulma in the Dragon Ball franchise, Luna in Sailor Moon and She-Ra in She-Ra: Princess of Power. Her best roles are the Tsunderes, Cool Old Lady, young boys and action girls.

This actress has a brilliant and fruitful career that goes beyond five decades, starting in 1959 (when she was just 11 years old). In 1998, she left her role as Bulma during the end of the Cell Arc in Dragon Ball Z due to financial problems with the now-defunct Intertrack; they arbitrarily vetoed Garcel, despite her long career and her popularity with the fandom, and replaced her with Mónica Manjarrez. Later, she eventually reprised the role starting with Dragon Ball Z Kai, continuing into Dragon Ball Z: Battle of Gods, Dragon Ball Z: Resurrection ‘F’, and Dragon Ball Super.

Several relatives of hers are or were also VA's: her older sister Sylvia Garcel, her niece Vanessa Garcel, her brothers-in-law Rubén and Jorge Arvizu, her husband (plus fellow dubbing director and often cast companion) Jorge Roig, her and Roig's son Jorge Roig Jr., her daughter-in-law Queta Calderón, her grandchildren Cecilia Gómez and Emilio Ángeles, and her great-granddaughter Abril Gómez.

She has quite the acting relationship with characters not only played by her husband, but also by those voiced by Patricia Acevedo, Mónica Manjarrez, María Fernanda Morales, Rossy Aguirre, Araceli de León, René García or Mario Castañeda.

As the VA for Julia Roberts:

As the VA for Meg Ryan:

As the VA for Michelle Pfeiffer:

As the VA for Gary Coleman:

As the VA for Merrilyn Gann: