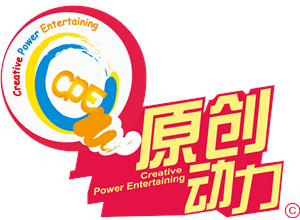 Creative Power Entertaining Co., Ltd. is a Chinese animation studio in Yuexiu District, Guangzhou, and owned by Alpha Group Co., Ltd., an animation and toy company, since 2013. They released their first series, Happy Family, in 2004, but they really became popular when they released Pleasant Goat and Big Big Wolf in 2005 and made it their Cash Cow Franchise.

They've also made some other shows since then. Their shows are all comedic, Animesque, and aimed at kids. While Pleasant Goat is popular in China, their other shows are mostly obscure, unsuccessful Short-Runners. All of their works, including Pleasant Goat, are almost completely unknown in the West.

Creative Power Entertaining has a channel

In addition, Creative Power Entertaining is involved with these works, though they did not create them:

"Let our tropes entertain you!":