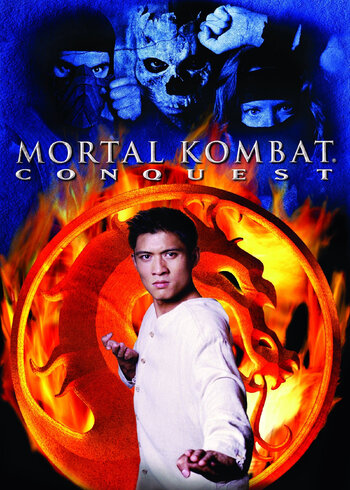 "In each of us there burns a soul of a warrior. In every generation a few are chosen to prove it. Centuries ago, in a time of darkness and fury, that fate befell three strangers. A monk, Kung Lao; an exiled guard, Siro; and a thief, Taja, who have to defend our realm from the forces of Outworld. By fighting for their lives, by fighting for their honor and by fighting for their realm...in a tournament called Mortal Kombat."
— Opening Narration
Advertisement:

Mortal Kombat: Conquest was a short-lived live-action TV series based on the highly successful Mortal Kombat video games, airing from 1998 to 99 first in syndication and then on TNT.

The series revolved around the winner of the previous Mortal Kombat, Kung Lao and his allies Siro and Taja versus various individuals who threaten Earthrealm. The series is a Prequel to the events of the video games, despite the appearance of numerous characters who would not canonically show up until centuries later. The series is considered to be Broad Strokes canon to the main timeline.

It was finally released on DVD in the US in March 2015 after originally being released elsewhere.