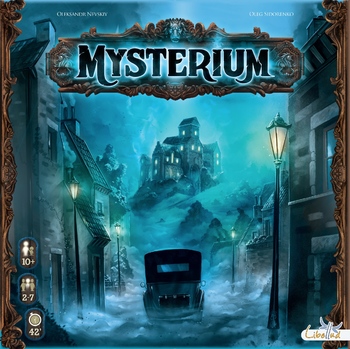 “Dearest Alphonse...I would be honored if Alma, Ardhashir, Madam Wang, Jessalyn, and your good self could join me without delay to solve this mystery."
— Conrad Mcdowell, letter dated Sept. 19, 1920
Advertisement:

Mysterium (Polish: Tajemnicze Domostwo) is a 2014 cooperative board game designed by Oleksandr Nevskiy & Oleg Sidorenko. It was published in English by Libellud in 2015.

The game is set on Halloween night, 1920, when a group of psychics gather at the isolated Warwick Manor in Scotland to contact the ghost of a manservant who died thirty-five years ago. Over the course of a seven-hour seance, the ghost sends them visions of the people, items, and locations that may have been present at the time of his death. Only after all the psychics have deciphered their visions can the truth finally be revealed.

Before the game begins, players choose one person to act as the ghost, while the rest will control the psychics. Over the course of up to seven rounds, the ghost will send the psychics dreams in the form of abstract, surreal scenes depicted on 'vision cards'. The psychics will have to interpret these visions as corresponding to the potential people, locations, and objects laid out on the board. Once each psychic has correctly identified their unique person, location, and object, the ghost will send out three cards in the form of a final vision; players must then figure out which of the psychics has had visions of the actual murder scene.

Mysterium's first expansion Hidden Signs was released in June 2016, adding new cards to every category. The game's second expansion Secrets & Lies hit shelves in August of 2017, adding much of the same as the last one, as well as History Cards, giving context to the Ghost's terrible demise.

This tabletop-game provides examples of...