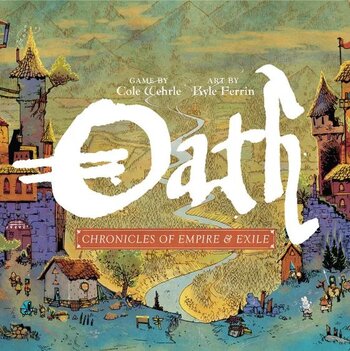 Oath: Chronicles of Empire and Exile is a 2021 Political Strategy Board Game from Cole Wehrle and Kyle Ferrin of Leder Games (creators of Vast and Root). In it, one player steps into the shoes of the powerful Chancellor ruling over a fantasy Empire by virtue of uploading its Oath, while the rest start out as Exiles trying to overthrow them by either being a better Oathkeeper or by receiving and fulfilling a Vision of the Empire heading down a different path. Unique aspects of the game include:

The game was funded on Kickstarter in January 2020 and shipped in 2021. The rules can be downloaded from the official website