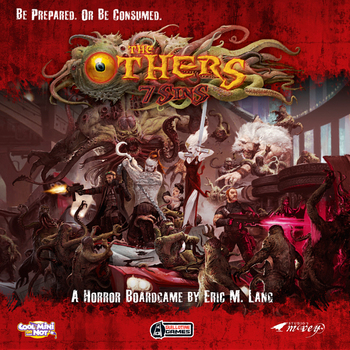 The Others is a horror-themed board game designed by Guillotine Games and published by CMON after a successful Kickstarter campaign in 2015.

The city of Haven, in Cornwall county, England, is the site of a clandestine war between the Hell Club and F.A.I.T.H. for the fate of the world. The Hell Club has the patronage of the Others, extradimensional horrors that draw power from the expression of human sins. F.A.I.T.H. (the Federal Authority for the Interdiction of Transdimensional Horrors) is a secret agency that watches for signs of the Others' corruption and moves in to put an end to it; their agents come from all over the world and generally have one reason or another to want to fight the Others personally.

One player controls the opposition and is called the Sins player. Up to four other players control agents of F.A.I.T.H. and progress through a story of linked objectives on a configurable board representing locations in the city of Haven. The Hero players win if they complete the current story, the Sins player wins if the Heroes get wiped out first.

The base game contains F.A.I.T.H's Alpha Team, the Pride and Sloth creatures, the Hell Club, and eighteen acolytes. Expansion boxes contain Beta, Delta, and Gamma Teams, creatures of Lust, Gluttony, Envy, Wrath, and Greed, the Sons of Ragnarok, and the Heralds of the Apocalypse. Two Kickstarter-exclusive sets were Omega Team and the Men of F.A.I.T.H.

The Others features the following tropes: