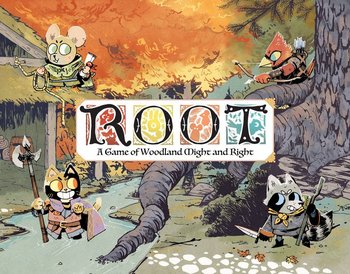 Root is a board game designed by Cole Wehrle and first released by Leder Games in 2018. It is a fully Asymmetric Multiplayer strategy game simulating burgeoning tension and war that's about to take place in the forest.

Each player takes the role of one of the anthropomorphic animal factions and battle each other for the control of its resources or to spread their ideology.

Games and expansions include:

In August 2020, a digital version of the game was released on Steam.

Root: The Tabletop Roleplaying Game, where players take on the role of Vagabonds navigating the forest, was produced by Magpie Games. See also Oath: Chronicles of Empire and Exile, the next game by the same developers, with similar themes.

The base game of Root contains examples of:

Root: The Exiles and Partisans Deck contains examples of: