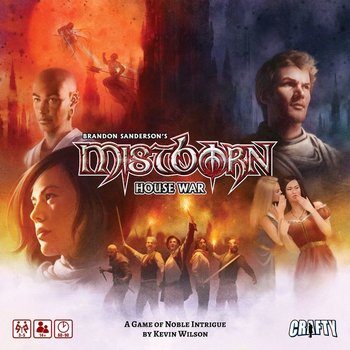 Will you save everything you've known... or help it all burn?
"Unlike a lot of economic games, House War is really about negotiation, haggling and manipulation – you win not based on what you have, but how well you cajole, threaten, ally with and betray others to achieve victory."
— Alex Flagg, lead developer
Advertisement:

Mistborn: House War is a semi-cooperative resource management board game created and developed by Crafty Games and designed by Kevin Wilson, in cooperation with Brandon Sanderson and Dragonsteel Entertainment. It is based on The Final Empire, the first book of Mistborn: The Original Trilogy written by Sanderson.

Together, players must cooperate to solve the myriad of problems faced by the empire, from environmental and social turmoil to political strife and outright rebellion. They'll even face off with Kelsier, Vin, Sazed, and the other heroes of the novels to maintain the delicate balance held in place for the last thousand years. Simultaneously, they’ll compete to become the most powerful House in the land by currying favor from the almighty Lord Ruler. To win, they must build alliances, negotiate deals, and undermine both their enemies and their allies — all at just the right time.

Mistborn: House War plays like some strange lovechild of a basic Eurogame and Munchkin. Each House wants to gather resources, then use those resources to solve various problems that arise in the Empire. By doing so they earn the Lord Ruler’s Favor, which is this game’s version of Victory Points.

However, these problems are expensive and difficult to resolve, and a single player often won’t be able to do it. They'll have to make deals with other players: giving resources, part of the Favors earned if the problem is solved or promises to help during future problems in exchange of their help. Therefore, while mostly a board game, House War also features elements of roleplay during these negociations. If a problem goes unsolved for too long it “erupts”. An erupting problem can have various effects, but all of them are negative for one or all Houses. To help them solve the problems, the players can use Personality Cards that have various positive effects. Some of these cards can also be used to hinder the other players.

Mistborn: House War generally ends when Vin (the leader of the rebels) is flipped off of the problem deck and resolved one way or the other - either she is defeated or she erupts - or, more rarely, if the Unrest meter rises to 8 before she's flipped off. (Note that Vin is worth a great deal of Unrest, so if she erupts it will often - though not necessarily - max out the Unrest meter.)

There are two ways that Mistborn: House War can end. If the Unrest meter remains inferior to 8, either because Vin is defeated or she erupted without bringing enough Unrest, the Final Empire will survive and the player with the most Favor wins. If the Unrest meter rises all the way to 8, the Final Empire will collapse. In that case, the player with the least Favor wins, because he or she is the most distant from the Lord Ruler and least likely to be caught up in the backlash. Gameplay-wise it means that nobody is ever really out. If a player is way behind on points, they can shift their strategy to undermine the others and win by losing, so to speak. Plot-wise, it adds a sense of real weight to the decisions and puts some urgency behind all the squabbling. Fighting for position is the core of the game, but you do need to remember that you’re still part of the Final Empire, and are bound up in its fate - unless, of course, you prefer to stand back and let it fall.