Film / No Blade of Grass 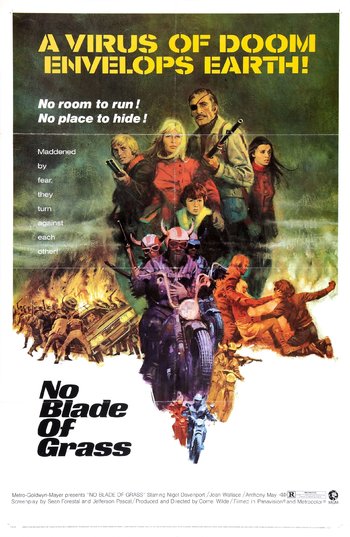 No Blade of Grass is a 1970 British apocalyptic Disaster Movie directed by Cornel Wilde, starring Nigel Davenport, Jean Wallace, and Lynne Frederick. It is based on the novel The Death of Grass by John Christopher.

In the near future, a virulent new disease begins destroying crops worldwide, targeting all members of the grass family.note Crop-wise this includes wheat, barley, maize (corn), millet, oats, and rice. This is about 51% of human dietary use, and most of the rest is from meat - meat animals that are (you guessed it) raised on feed made from one of these sources, or other grasses that humans don't typically consume In response, society begins to break down, and the leaders of the world take to extreme measures to eradicate the plague. After London is overwhelmed by food riots caused by the famine, a man named John Custance (Davenport) tries to lead his family to safety in Westmorland. This isn't an easy task, as the countryside is crawling with all sorts of deviants who will stop at nothing to get what they want.