Series / Fated to Love You 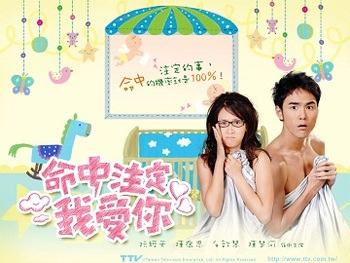 The series was first broadcast on Taiwan TV in June 2008, and was nominated for six awards at the 43rd Golden Bell Awards, Taiwan. It was awarded the 2008 Best Television Series and Best Marketing Program. It is the first part of a trilogy; the second installment, Drunken to Love You, aired in Spring 2011.

Chen Xin Yi is the Butt-Monkey of an attorney's office, performing dozens of menial duties and frequently doing the work of her coworkers, who usually ignore or ridicule her. She plans and pays for a romantic love cruise, hoping to lose her virginity to and thus keep her current boyfriend.

On the same cruise is Ji Cun Xi, the wealthy sole heir of a cleaning products company, who was planning to propose to long-time girlfriend and ballet dancer Anna. Anna chooses a lead role in a production of Swan Lake at the Lincoln Center in New York City, over Cun Xi, and never boards the cruise liner.

In a huge misunderstanding Xin Yi and Cun Xi end up spending the night together, only in the morning realizing the mix-up.

Although they vow to forget about the incident and continue on with their individual lives, Xin Yi soon finds out she is pregnant and the news reaches both Cun Xi and his family. Cun Xi's grandmother is ecstatic over having a grandchild and forces the two to get married.

In 2014, the series was remade into a Korean Drama.

The Korean remake contains examples of: