The territories of the Gaza Strip and the West Bank, are a disputed territory between Israel and the government of the Palestinian Territories, the Palestinian Authority, which names its administrative area "the State of Palestine" (Arabic: دولة فلسطين Dawlat Filisṭīn). The PA is a United Nations observer member, granted such status in 2012 despite Israeli protests. The Palestinians also claim East Jerusalem, while some claim all of Israel as well. Currently the Palestinian state self-proclaimed in 1988 is recognized by 136 UN members, though the Anglosphere (USA, UK, Australia, New Zealand) do not do so. De facto the territory is under Israeli rule. Meanwhile, Israel recognized the West Bank as the district of Judea and Samaria Area (Hebrew: אֵזוֹר יְהוּדָה וְשׁוֹמְרוֹן Ezor Yehuda VeShomron, Arabic: يهودا والسامرة‎‎ Yahuda wa-Sāmerah).
Advertisement:

From a historic and cultural standpoint, the Palestinians as a nation were molded up from a variety of peoples who made the region their home throughout millennia. The Arab invasion of the 7th century changed the lingua franca, culture, and some settlement patterns of the region, but for the most part the indigenous communities were same old same old, and yes, the majority of them did consist of Jews. In layman's terms, the Palestinians are mostly descended from (Mizrahi) Jews of Levant, and their closest relatives are the Mizrahi Jews who still live in the area (this makes the conflict even more tragic and also ironic).

The origins of the modern concept of a Palestinian state originate in the 1947 UN partition plan dividing British Palestine between Israel and a theoretical Arab state. However, many of the Arab leaders opposed giving Israel such a state in Palestine, and when Israel declared independence in 1948, the Arab countries, fearing that the Israelis might occupy the whole former British Palestine, declared war on Israel in the first Arab–Israeli Conflict. The Palestinian Arabs fought with militia groups alongside the Egyptians, Jordanians, Syrians, and Lebanese. When a ceasefire was imposed, the Egyptians occupied what is now the Gaza Strip and Jordan annexed what is now the West Bank. While some accepted Israel's sovereignty and were allowed to remain, thousands of Palestinians who refused to recognize the new country fled or were expelled, settling in nearby countries. Many (along with their descendants) remain in a stateless limbo. Jerusalem was divided into two, the Israeli West and the Jordanian East, including the Temple Mount.

When the Six Day War occurred in 1967, the Israelis captured East Jerusalem, the West Bank, and the Gaza Strip. Needless to say, many of the Palestinian Arabs are not amused. Some groups, one of them the Fatah group led by Yassir Arafat, fought a campaign against Israel, using guerrilla tactics, but also using terrorist warfare like hijacking and bombing Israeli cities. In the late 1970s and 80s, Menachem Begin formally included the Palestinian territories as Israel and they are considered as such on Israeli maps of that time. Jordan formally surrendered its claim on the West Bank after Egypt had all but renounced it earlier at the Camp David talks. The Intifada of 1987 erupted against Israeli control, though it was marred by violence from left to right. In 1994 the Oslo peace accords between Arafat (now the leader of the Palestinian National Authority) and Israeli PM Rabin had set a timetable on a future Palestinian state. However, there were many issues that remained to be solved like the Israeli settlements, the remaining Palestinian refugees, East Jerusalem, etc. that are unresolved to this day, and this caused a second Intifada in 2000.

In 2005, Israel unilaterally withdrew from the Gaza Strip due to many Israeli soldiers being killed there. At the same time, the PNA suffered from civil war when Hamas occupied the Gaza Strip. The two territories split up, with Mahmoud Abbas of Fatah being recognized as the legitimate leader of Palestine, though de facto he only has a say in the West Bank. As a result of this, Gaza Strip is currently blockaded from all sides, including Egypt, which refuses to recognize Hamas due to its association with the Muslim Brotherhood, which it considers a terrorist organization.

The West Bank (specifically, the Judea and Samaria regions that it sits upon) is the location of some of the most important events in the The Four Gospels. Bethlehem, a quiet town 4.5 miles south of Jerusalem, is the birthplace of Jesus. Al-Ezariya just a little east of Jerusalem has the ancient name of Bethany, the home of Jesus' friend Lazarus and his sisters Martha and Mary; in fact, the town is named after Lazarus himself, whose tomb is reputedly within the city. Jericho, to the north of the Dead Sea, is where Jesus healed the blind beggars, not to mention having quite a history in the Book of Joshua. The depopulated town of Imwas, near Modi'in Maccabim-Re'ut, is the Biblical Emmaus, the main road to which was where two of Jesus' disciples witnessed his appearance post-resurrection. And of course, most events that happened in Jerusalem occurred in East Jerusalem, simply because that is where the Old City is located; the Mount of Olives (where Jesus arrived and saw the city for the final time), Bethesda (where he heals a man), Gethsemane (agony of the garden), Calvary (site of crucifixion), and the Church of Holy Sepulchre (Jesus' reputed tomb). 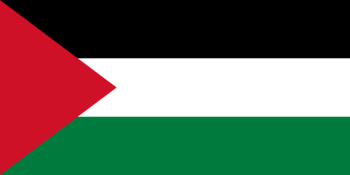 The flag is based on that of the Arab Revolt against the Ottomans back in World War I (save for the white and green reversed).
Emblem of Palestine 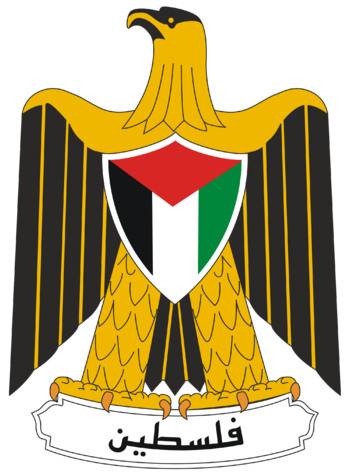