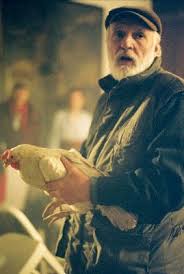 Holding a chicken is the least bizarre thing he ever did!
Advertisement:

Jan Švankmajer (born September 4, 1934) is an internationally acclaimed and influential Czech animator and film director. His works are often surreal and make use of live-action, cut-outs, stop motion, claymation and puppet animation. He has both made short films and full length films.

Švankmajer works within national Czech(oslovakian) traditions such as fairy tales, puppet theatres and the surreal stories of Franz Kafka and Karel Čapek. His films are often strange, dark and disturbing, but also have a Dark Comedy side to them. Still, they are highly original and the creativity is impressive. Because Švankmajer worked under the Communist regime his films remained unknown in the West until the 1980's. Even worse, the government banned him in 1972 from making films, and many of his later films were suppressed.

Since then, Švankmajer has been discovered and praised by film and animation fans alike. People like Terry Gilliam, Tim Burton and The Brothers Quay have been influenced by his work. His best known film is probably Alice (1988), which has become a cult classic and was reviewed by Oancitizen for Brows Held High.

Among his films are:

This animator/director's work provides examples of: