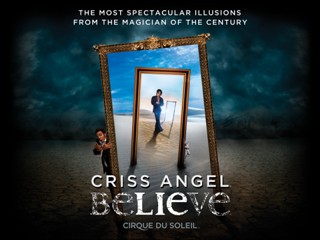 Cirque du Soleil's twenty-fourth production opened Halloween 2008 at the Luxor Hotel and Casino in Las Vegas, Nevada. Directed by Serge Denoncourt, this is the first Cirque show built around a specific performer — Stage Magician Criss Angel, who hit the big time with his TV show Mindfreak. As such, this is also Cirque's first show to be based around magic and illusion, with their grandiose production values providing a gothic-inspired atmosphere for his tricks.

was typical) and initial audience response was no better. As a result it was retooled, dropping the original storyline

linking the tricks together and from there most of Cirque's conceptual contributions. A further Retool took place in 2016, whereupon the show was retitled Criss Angel Mindfreak Live! In this form, it ran until 2018.

To make the trope examples short and sweet, they are divided between the original version of the show and the first Retool.

The retooled version retained and added examples of: