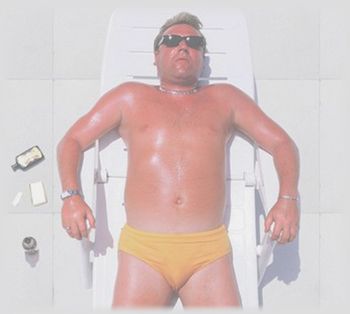 The eponymous "Sexy Beast".
"Shut up, cunt! You louse. You got some fucking neck. Retired? Fuck off. You're revolting. Your fucking suntan... you're like leather. Like a leather man. You could make a fuckin' suitcase, a hold-all. You look like a fat crocodile, fat bastard. You look like fuckin' Idi Amin. State of you... you should be ashamed of yourself. Who d'you think you are? King of the castle? Cock of the walk? You think this is the Wheel of Fortune? You make your dough and fuck off? 'Thanks, Don. See you, Don. Off to Spain, Don. Fuck off, Don.' Lie in your pool laughing at me. D'you think I'll have that? You think I'll have that, ya ponce? All right, I'll make it easy for you. God, you're fucking trying! Are you gonna do the job? It's not a difficult question. Yes or no?"
— Don Logan
Advertisement:

Sexy Beast is a 2000 British crime film directed by Jonathan Glazer, starring Ray Winstone, Ben Kingsley, and Ian McShane. The film received a lot of buzz on the indie circuit, but is perhaps best known to mainstream audiences as the other film released in 2000 with a nightmarish, anthropomorphic bunny.

Gal Dove is a retired English crook living a life of modest luxury in Spain. He spends his days sunbathing by the pool while his beautiful wife Dee Dee jets around town. At night they dine with their best friends from England, Aitch and Jackie. One day, a ghost from Gal's past arrives: Don Logan, an old soldier of the London underworld. Bitter, jealous, and violent, Don barges into Gal's home with an offer that he can't refuse: return to London to participate in a dangerous heist. Can Gal resist Don's overpowering force of will and refuse the summons? And can he survive the repercussions of their meeting?