LARP And The Real Girl 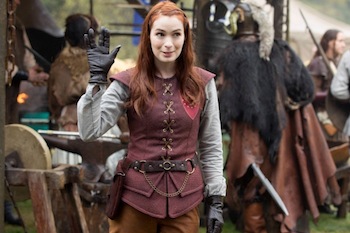 "Smell you later, bitches." —Charlie
"Now you're here, and if you guys are here, monsters are here. Why do I have such bad luck? What am I, some kind of monster magnet

? [Beat] Is there such a thing as a monster magnet

?"
— Charlie [to Dean and Sam]
Advertisement:

Garth sends the brothers to Farmington Hills, Michigan, to investigate the death of Ed Nelson, who was ripped limb from limb in his locked bedroom. They discover that Ed was a LARPer in a game called Moondoor. Ed's friend and fellow LARPer, Lance Jacobson, dies in police interrogation after a tree-shaped mark appears on his arm. Dean and Sam research the Moondoor website, and find that the Queen of Moondoor is none other than Charlie Bradbury.

Dean and Sam find Charlie, and she agrees to canvass the other LARPers with Dean, once he changes into a more appropriate costume. Sam goes to the tech tent to research other accidents that happened to Moondoor LARPers, including one player being hobbled and another beaten up by his own mace.