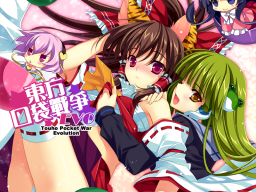 Touhou Pocket Wars Evolution is a strategic RPG based around collecting and levelling the various Gacha figurines themed after characters from the Touhou Project series. It is a sequel to Touhou Pocket Wars.

The game's premise is that of the player taking on the role of a Touhou obsessed fan wanting to try out the newly released Touhou themed hybrid figure-collecting card-battling game. You are later transported to Gensokyo itself and from there becomes something reminiscent of a fairly standard self insertion fanfic.

Touhou Pocket Wars Evolution Plus is an Expansion Pack that adds a follow-up story to the original, new characters and an entirely new battle mechanic in the form of UFO's.

This game currently has a 100% complete English patch making it playable even for those who don't speak Japanese.